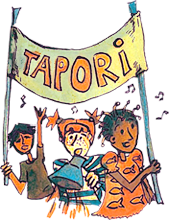 Tapori was created in January 1967 by Joseph Wresinski, the founder of ATD Fourth World Movement. He lived in Noisy-le-Grand in France. It was a place where hundreds of poor families lived in houses made of sheet metal.

Joseph Wresinski had a lot of hope in children.
He was amazed every time he got a letter from a child.
It was like a treasure!
Here’s what he answered a class of children who wrote to him:
“The worst part about being poor is being alone, rejected,
and misunderstood. You finish by thinking you’re not a child like the others… Friendship is the most important thing we can give.”

During a trip to India, Joseph Wresinki met children who lived on the streets or in train stations. They were called “Tapoori.”

These children collected the leftover food that travellers left on the trains. They then shared with the other children from their group so each had something to eat.

When he got home Joseph wrote to other children,
“You’re like the Tapoori when you do whatever you can to try to build a world of friendship, where there’s no more poverty.”

He named the network of friendship that he created Tapori to honor these children who had a difficult life but knew how to stick together.